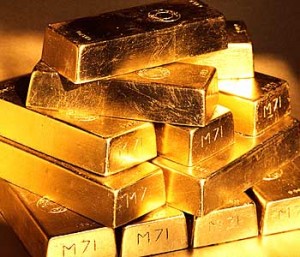 With the recession, read depression, continuing apace, the world is in a major cycle of deleveraging.  The phoney boom of 2000-2007 can be attributed almost entirely to loose monetary conditions, exacerbated by huge trade imbalances which kept the price of Western goods depressed and kept interest rates artificially low.  The deleveraging has now begun, and it is going to be deeply painful.  Buy some gold and buy it now.  We recommend real physical gold stored in a Vault.  See here for the safest option.

As governments try desperately to fight deflation money will inevitably continue to be pumped into the economy.  Helicopter Bernanke and his printing presses have vowed to destroy the fiat (paper) currencies, and as anyone who looks at the deficit numbers can see there really is no other plausible option.  So forget your savings, forget your sticks and shares.  They will all end up worthless, just as they did in Weimar Germany.  When inflation takes off it a millionaire and a pauper will be equal.  Paper bills and bank accounts will be worthless.

How can you protect yourself?  The good news is that Gold will retain its value.  In fact, it always has.  It still takes almost exactly the same amount of gold to buy a loaf of bread as it did in Roman times. Same for a fine suit.  Gold can be neither destroyed nor produced.  It can only be dug up, but production is still falling despite the demand.  There is less of it and more people willing to protect themselves from ruin.  As gold becomes a true safe haven it will rocket.

How high will Gold go?

When projecting gold’s potential price peak, there are many ways to measure it. Conservatively, gold reaching its inflation-adjusted 1980 high would have it topping around $2,400 an ounce. More radically, if the US tried to cover its cumulative foreign trade deficit with its current gold holdings, gold would need to hit about $32,000/oz.

Golly gosh.  Even if gold peaks at $2,400, you still get a double from current levels. (But unless government monetary policies immediately reverse course, gold isn’t stopping at $2,400.)

So there’s my answer. Yes, you have to accept my projection of gold’s ultimate price plateau. And you have to sell at some point to realize the profit. But if the final chapter of this bull market looks anything like the chart above, I don’t think you’ll be too upset having bought at $1,200.

How to buy Gold

There are four ways to buy exposure to Gold.  Gold Coins, Gold Bullion, Gold ETFs, and Gold Stocks and Shares.

Do you have any thoughts on this article?  Comments?  Questions?  If so, please write them in the section below and I will answer them here.  Your details will of course remain confidential.