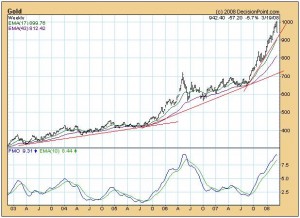 Gold stocks are as cheap as they have been in over a decade. Hard to believe given the rocketing gold price, but shares have been left behind.  As any investor knows, buying stocks in any company is a leveraged play on the profitability of its prime business.  In the case of gold we have been in a decade of sharply rising prices.  For the miners, the cost of production is generally covered at between $800 and $1000 per ounce.  As the price rises above that, and it is currently sitting very much higher than that point, the remainder is pure profit.
If you believe, as I do, that governments around the world will continue to interfere in markets and try to bail out their near-bankrupt countries, then gold stocks are going to the moon.  If you don’t have a few of these in your pockets, then jump in now.  As a point of disclosure I should note that I do own several of the stocks below, though at the point of writing only the majors.
The following are my top choices from the XAU index.  Note that these are all US listed.  UK Gold shares follow.
And for UK listed shares I recommend buying a selection of the below:
Gold may well correct further, but with the problems in the Euro and sovereign debt far from easing, I would expect these stocks to go much much higher over the next 5 years.