As any good contrarian investor will tell you, once something is being talked about in the mainstream press, and being tipped by your taxi driver, it’s time to sell.   In some instances, the magazine cover is the most recognised way to tell if a concept, idea or person has gone mainstream. Remember the famous Business Week 1979 cover, “The Death of Equities”?  That is a textbook case of the media getting it wrong. The Dow Jones Industrial Average was at 800 back then. This week, even after all the recent turmoil, it closed at over 11,500.

The recent rise in the price of gold has many wondering if we have reached the stage where, as an investment theme, it has gone mainstream. Since July 1999, the average price of gold has risen from $255.81 to the recent highs of $1,900. When any commodity price rises so much, let alone the dramatic increase in the stocks represented in that industry, it warrants some cause for concern. As a contrarian indicator, we could look at the many magazine covers out there to make our determination of whether gold has gone mainstream. However, using such an indicator can take a lot of cover stories and a substantial amount of time before we eventually could consider ourselves correct. The number of missed opportunities and inaccurate calls for a market top would be many.

However, with the advent of keyword searches and proprietary databases, we can look at the historical significance of all mentions of gold.

In the chart below we see, on a 10-year basis, the number of times that gold is mentioned in Barron’s from May 1921 until August 2011. For reasons that shall be explained, the decades of the 1930s and 1980s were periods when the number of gold mentions peaked. 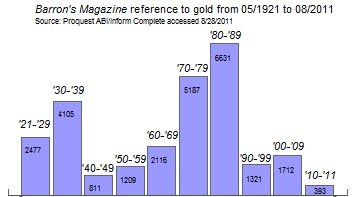 You can see that the peak in the number of mentions on the topic of gold occurred after major turning points in the price of gold. The bar chart below shows the decade of the 1930s in greater detail. The year of 1932 shows the most articles written on gold. The decline in interest after 1932 reflects the herd mentality of diminished expectations for gold after England’s September 21, 1931, departure from the gold standard.

The impact of England’s suspension of the gold standard led to a domino effect of countries abandoning the gold standard. Denmark, Norway, and Sweden abandoned the standard by the end of the same month. In October 1931, Finland was next to go off the gold standard. Those that remained on the gold standard in Europe suffered huge losses due to the devaluation of their large holdings of British pounds in their treasury. The belief at the time was that the currency would always be backed by the set price of gold. 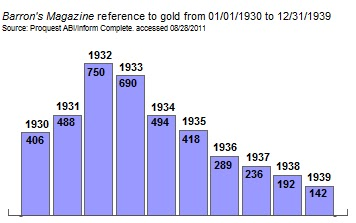 However, after many countries departed from the gold standard, the price of gold stocks began to bottom. With fewer articles on the topic of gold after 1932, the bull market in precious metal stocks was just beginning as demonstrated in the chart below of gold and silver stocks from 1924 to 1933. 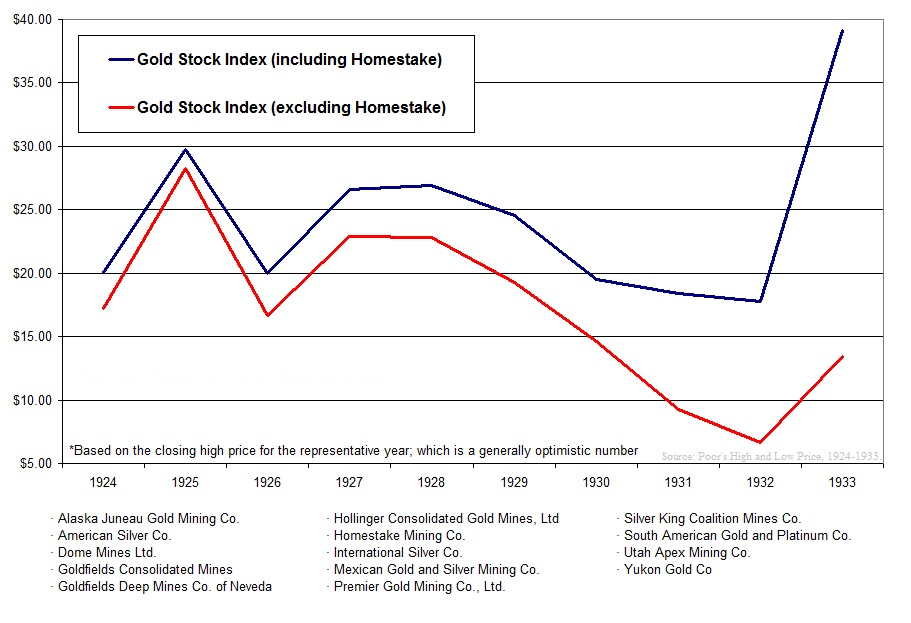 During the financial crisis from 1929 to 1932, it seems as if gold was popular in Barron’s until it was no longer being propped by governments through the use of a gold standard. Once freely able to find a price, the process of gold stocks bottoming was inevitable.
After the peak in the price of gold in 1979/1980, Barron’s was again late in the most mentions of gold. However, the period that followed the 1980’s peak in mentions of gold held at very high levels as the die-hard gold bugs were unwilling to accept the reality of the disinflationary environment that the world economy was entering.

In the chart below, we observed that a significant drop-off in mentions of gold after 1987 may have to do with the fact that gold stocks declined equally as much as the Dow in the same period of time. Since the decline in gold stocks couldn’t offset the losses of stocks as anticipated, anyone who would have claimed that gold stocks were a refuge during a declining market had all the evidence to demonstrate that such a notion was foolhardy. 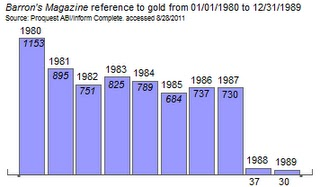 In light of the fact that I still believe that we’re in a secular bull market in gold stocks, my expectation is that the number of mentions in gold need to match the levels of 1980 or 1932 before we’d be concerned that the lagging contrarian indicator of Barron’s mentions of gold has any relevance on future long-term price declines in the metal and gold stocks.

In absolute terms the price-to-EBITDA of the XAU Index is currently around 7.5 times, which is only about 10% higher than the price-to- EBITDA of the S&P 500 Index. Both of these metrics are as low as they have been in a decade.